Statement by Audrey Azoulay On the passing of Kofi Annan: the world loses a great defender of peace and modern multilateralism 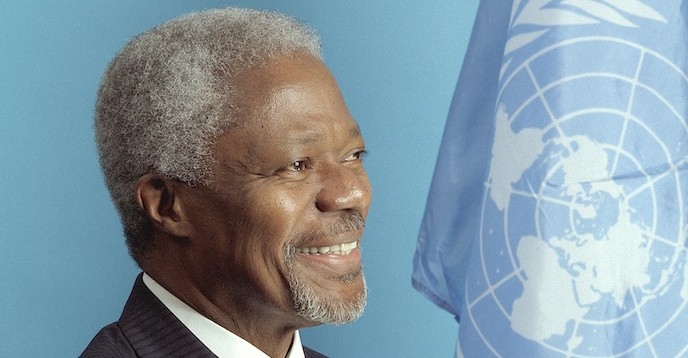 On the passing of Kofi Annan: the world loses a great defender of peace and modern multilateralism

“I am deeply saddened to learn of the sudden death of former United Nations Secretary-General and Nobel Peace Prize laureate Kofi Annan,” said Audrey Azoulay, Director-General of UNESCO.  “A great defender of peace, he was the very embodiment of peace and of a resolutely modern vision of the United Nations.

His conviction that a culture of peace should be developed was fully in line with the mandate and daily commitment of UNESCO.

I remember his kindness, his determination and his absolute elegance. I would like to extend my sincere condolences to his family and friends, to his fellow Ghanaians and join the international community in saluting his tireless efforts for a better world and lasting peace through international cooperation.”

In 2011, writing for a UNESCO publication, he said : “We need to act at a deeper level for the prevention of violent conflicts before they arise. We need a culture of peace. The first and fundamental principle of such a culture must be tolerance. This means welcoming and celebrating the differences that make our planet such a varied and richly textured place.”

On 8 December 1998, he took part in UNESCO’s celebration of the fiftieth anniversary of the Universal Declaration of Human Rights. He recalled that “United Nations action on human rights is one and indivisible. ‘All human rights for all’ is our common goal.” It is in this spirit that he has embarked on a vast reform of the United Nations.

As we prepare to celebrate the 70th anniversary of the Universal Declaration of Human Rights, its committed vision of multilateralism and the central role of the United Nations remains as relevant as ever.