THE INTEGRATION OF WORLD HERITAGE CURRICULUM IN THE ACADEMIC PROGRAMMES OF ECOWAS MEMBER EDUCATIONAL INSTITUTIONS. 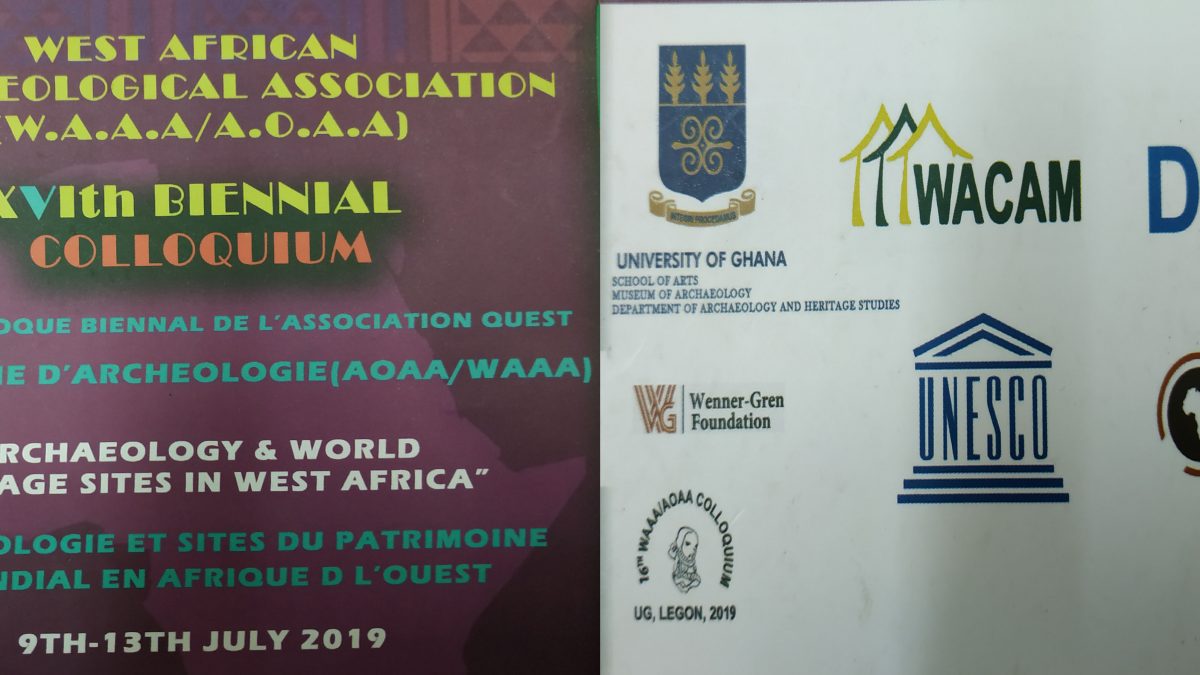 This communique was endorsed at the Biennial General Assembly during the 16th West African Archaeological Association (WAAA/AOAA) Colloquium held at the University of Ghana, Legon from July 9-12, 2019. On behalf of the Executive Board of the Association and entire members, I will be very grateful if this communique is adopted and implemented so as to inure to our collective benefit in West Africa.

We, members of the West African Archaeological Association (WAAA/AOAA), gathered at the General

Assembly Meeting of the 16th Colloquium of WAAA, which took place from 9 to 13 July 2019 do

Heritage Studies in hosting this biennial colloquium for a second time in a row.

Workshop on World Heritage and Educational Institutions in Africa at Great Zimbabwe,

Zimbabwe and at Saint-Louis, Senegal;

(WAAA/AOAA): ‘Call from Accra for Protection of Sites of Cultural Heritage by Ecowas

related to education and heritage as catalysts for sustainable development;

Parties to the World Heritage Convention.

• there is inattention to the sustainable management of World Heritage Sites in West Africa.

properties (51 cultural sites, 37 natural sites, 8 mixed sites), even though it boasts of a heritage

of unrivalled natural and cultural diversity that constitutes the very essence of its identity;

Heritage List in 1994, the Africa region hosts only 9 per cent of all World Heritage sites,

archaeology in facilitating our contributions to the documentation and inventory of sites, site

management and good conservation practices, the preparation of tentative lists and

nomination files, innovation and job creation with archaeological and heritage resources as

well as the creation of home-grown academic theories and practices to enhance this discourse,

We, the members of WAAA/AOAA note that:

1. being conscious of the Observer Status of the West African Archaeological Association at the

Economic Community of West African States (ECOWAS), the membership of WAAA/AOAA recommends that all ECOWAS member states and their higher educational institutions implement the UNESCO 1972 World Heritage Convention so as to sufficiently address the issues intrinsic to the Convention in West Africa;

2. the low inscription rate of heritage sites in West Africa must be increased through high quality

nomination dossiers based on close collaboration between academic institutions, specialized

institutions in World Heritage and the governments of member states;

3. the budgets of member states of ECOWAS allocated to the heritage sector must be increased

the Tentative and World Heritage Lists;

4. the support given to Academic heritage institutions in the member states must be increased to

heritage professionals and experts in the fields of heritage management and conservation;

5. there is the need to enhance academic guidance and sufficient integration of World Heritage

studies, heritage management and conservation studies into the existing programmes of

We, the Members further:

museums) and museums of member states, if any;

to host and conserve restituted and endangered art objects and antiquities of Africa;

their heritage in order to enhance local understanding, appreciation and conservation of

learning to accelerate the implementation of the above recommendations.

WAAA/AOAA at the University of Ghana, Legon, Accra, Ghana.