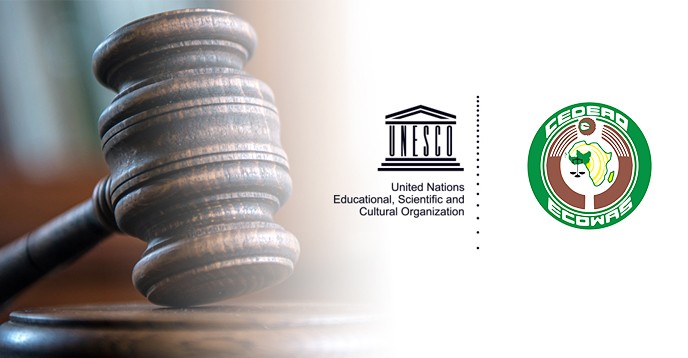 UNESCO and the Economic Community of West African States (ECOWAS) Community Court of Justice signed a Memorandum of Understanding (MoU) to strengthen the protection of freedom of expression, press freedom, and safety of journalists in West Africa. The agreement, signed by the Director-General of UNESCO Ms. Audrey Azoulay and the President of ECOWAS Court of Justice Mr. Edward Asante, will foster the commitment and cooperation between the two organizations to raise capacities and knowledge of judicial actors on the legal framework governing freedom of expression and press freedom. “Freedom of expression and its corollaries are at the core of UNESCO’s mandate,” said the Director-General Ms. Audrey Azoulay. “Our partnership with the ECOWAS Court signifies a vital cooperation that will allow journalists and individuals in Africa to exercise the right to freedom of expression with greater security.”

The agreement formalizes the cooperation existing since 2016 between the two organizations and facilitates the development of the joint activities targeting the judiciary and civil society in Africa, such as seminars, training workshops and Massive Open Online Courses (MOOC) on freedom of expression issues.

“The memorandum is a significant part of cooperation between both parties to protect and reinforce freedom of expression and press freedom in Africa,” declared Justice Asante. “I look forward to my further work with UNESCO and the judges and lawyers in Africa that will benefit from the cooperation between the two organizations.”

Over the past years, UNESCO has rolled out series of online courses in Africa in both English and French, along with on-the-ground workshops for judges, prosecutors, lawyers and civil society that help reinforce international and regional standards of freedom of expression. The courses have already reached around 1,800 judicial officers and civil society representatives in Africa, and provided crucial training to help defend free speech and end impunity for crimes against journalists.

This agreement with ECOWAS Court follows a similar MoU signed in August 2018 by UNESCO and the African Court on Human and Peoples’ Rights, which similarly aims at strengthening capacities of the judiciary in Africa on freedom of expression issues. The undertaking provides specialized training of judicial officials and exchanges in areas of freedom of expression, access to public information and safety of journalists. This project in Africa was based on a similar course launched in Latin America, where more than 10,000 judges and legal professionals were trained since 2013.