In July 2021, one of the external walls of the Fort at British Komenda unexpectedly collapsed when Ghana Museums and Monuments Board (GMMB) staff were undertaking preparatory works to reconstruct the damaged plinth.

Community members joined the GMMB staff to set up barriers around the incident area and to fix props for the structure. In April 2021, there was accidental damage to the long retaining wall of Fort Fredensborg in Old Ningo by a construction company that had been contracted to build a sea defense wall to limit the erosion of the shorefronts of Ghana. The southern walls of Fort Vernon at Prampram also collapsed after heavy rainfalls.

These recent incidents are not unique and urgent action is needed to halt the progressive deterioration and prevent further collapses of the structures. 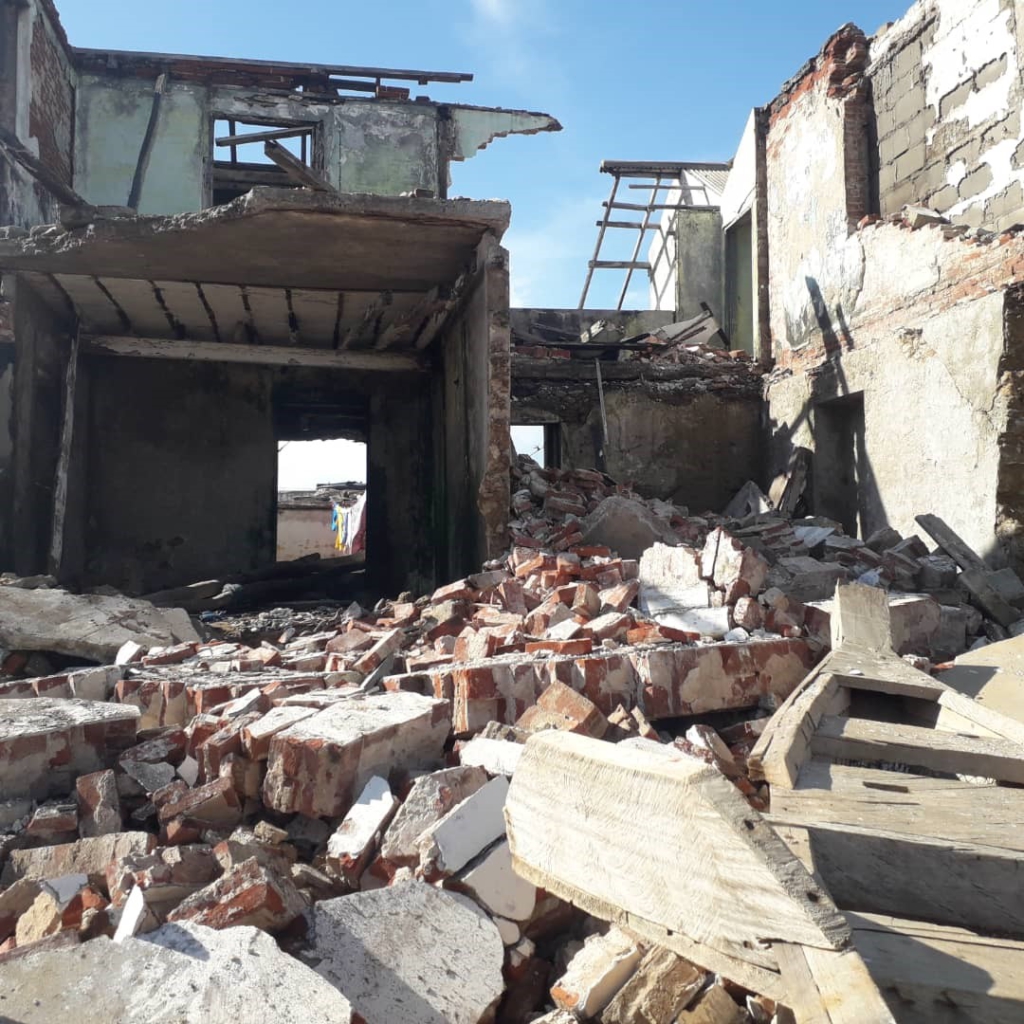 The 28 components erected between 1482 and 1786 played an important role in the gold and slave trade for four centuries and constitute a significant and controversial symbol of European-African encounters as well as the origin of the African Diaspora. The components have enormous historical relevance for the local communities along the shoreline, Ghana and the rest of the world and must be preserved for posterity. 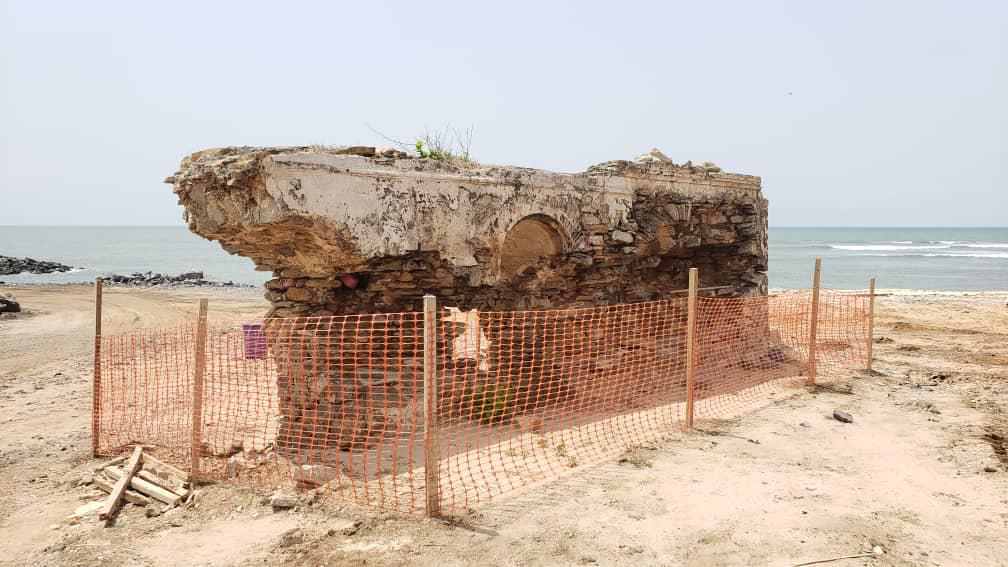 Within the framework of the implementation of the 1972 Convention on Cultural Heritage, UNESCO, ICOMOS and ICCROM undertook an Advisory Mission in 2019 and Reactive Monitoring Mission in 2020 to assess the state of conservation of these Forts and Castles and the threats they are facing. A major finding of the monitoring mission was the degradation of the structural integrity of components of the property that undermined the authenticity and threatened the Outstanding Universal Value of the property.

The report cites that lack of conservation and maintenance can be attributed to the structural integrity issues, which could be exacerbated by climate change related threats such as coastal erosion and unpredictable torrential rains. Because the Forts and Castles are situated along the coastal zone, the components are extremely vulnerable to environmental disturbances linked to climate change.

Some of the other mission findings included a lack of adequate site interpretation; lack of database information, documentation, and research; lack of a strategic vision for the entire property; poor regulation and management of development approvals and implementation; and encroachment and lack of boundaries and buffer zones. Other threats identified include illegal construction, urban pressure, incorrect interventions, neglect and abandonment, lack of sanitation, development projects without prior consultations with relevant stakeholders, and inappropriate reuses of the property’s components.

The collapse of the external wall at British Komenda reinforces the need to urgently assess structural stability of the components of the Forts and Castles as advised in the 2019 and 2020 mission reports. The incident has also raised internal awareness on the need to consider issues of safety affecting different components of the property, as well as staff and visitors.

In July 2021, the World Heritage Committee at its extended 44th session requested Ghana to implement the recommendations of the 2020 mission in Decision: 44 COM 7B.5, where sustainable planning and management of tourism were noted as some of the most pressing challenges concerning the future of the World Heritage in Ghana.

In the framework of UNESCO’s programme for culture in emergencies, an emergency response activity is currently being implemented by GMMB to undertake urgent stabilization and rehabilitation works at Fort Komenda. The project will be a positive step in drawing the needed attention to the conservation of components of the Forts and Castles that are in ruins.

Moreover, Ghana is receiving support for the preparation of a management plan for the World Heritage site within the framework of the International Assistance request submitted by Ghana and approved by the World Heritage Committee. The project is being implemented in cooperation with GMMB and it will offer the opportunity to harmonize all available material to produce a practicable management plan for the Forts and Castles of Ghana.

The Ussher Fort Slavery Museum recently re-opened after extensive rehabilitation works made possible through support from UNESCO and the Netherlands Funds-in-Trust (NFiT). Ussher Fort, formerly called Fort Crèvecœur, is one of the 28 components of the serial World Heritage site. Its Slavery Museum allows visitors to learn about a dark chapter in the history of the European-African encounters. It was opened in 2007 by the Ministry of Tourism, Arts and Culture with support from UNESCO and recounts the history of the transatlantic slave trade in Ghana until the British abolition of slavery in 1833. Fort Amsterdam in Abandze is also to receive support to consolidated the base of the structure through support from the French Government. This project will take place in 2022. 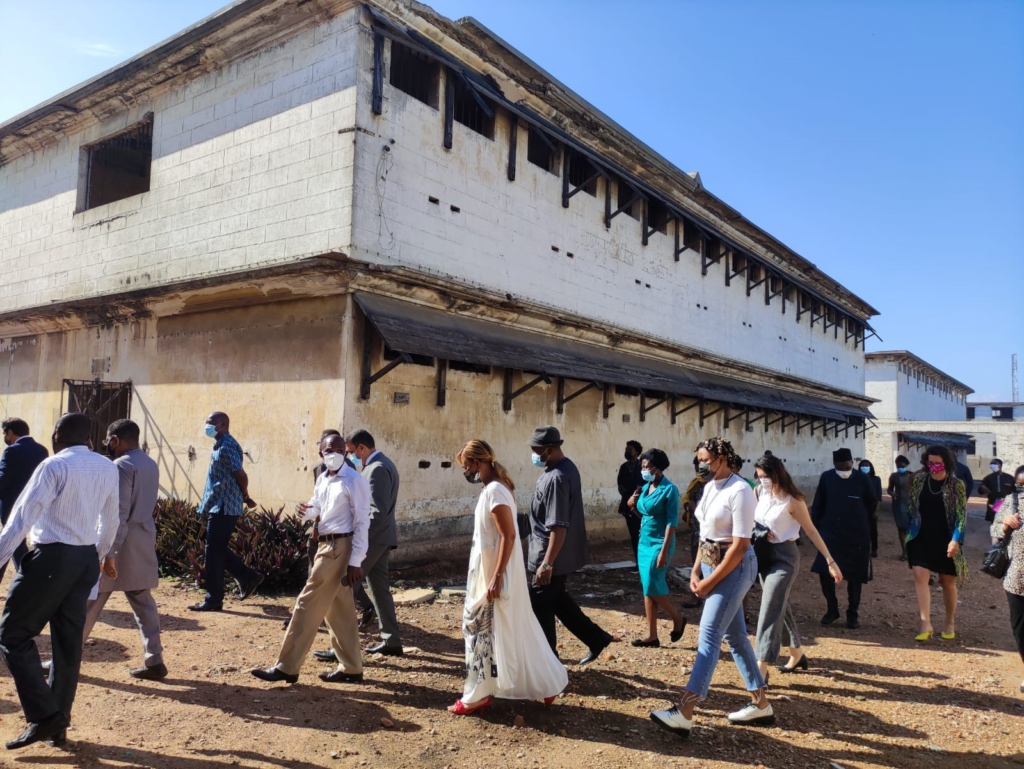 Aside from the Forts and Castles, Ghana has another property on the World Heritage list, namely the Asante Traditional Buildings, the last remaining testimony of the unique architectural style of the great Asante Kingdom with traditional motifs which are filled with symbolic meaning.

To this day, the Asante buildings are used for consultations with the deities to seek advice before making important decisions which reinforce a complex and intricate technical, religious and spiritual heritage.

A few of the 10 buildings are complete and, in most cases, parts of the original structures are missing. The integrity of the heritage site is threatened by impacts of climatic, geological or other environmental factors. This includes the deterioration of the fabric due to the warm and humid tropical climate that is damaging to the traditional earth and wattle-and-daub buildings.

Other challenges faced by the buildings are similar to the ones of the Forts and Castles, namely, lack of security, lack of delineation and buffer zones, lack of maintenance, lack of oversight and involvement of the traditional leaders and local communities in the preservation of the property and lack of local stakeholders’ appreciation of the concept of Outstanding Universal Value, integrity and authenticity.

Currently, support is provided by UNESCO for the implementation of conservation and tourism enhancement interventions for the Edwenase, Besease and Asawasi Traditional Buildings.

The Forts and Castles and Asante Traditional Buildings are both tangible evidence of the bonds between human beings. They are a shared legacy from the past and helps promote cultural exchange, dialogue, and peace. Contributing to preserving Ghana’s cultural heritage is more important than ever, not only because it boosts the tourism potential of the country, but also because the properties are at risk of complete deterioration without adequate safeguarding measures.